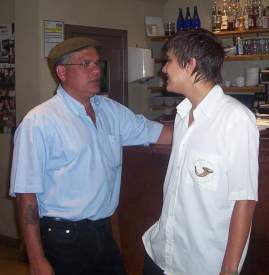 How can I accept that Kreol, my mother tongue, is inferior to other languages spoken in Mauritius? True, it has borrowed a lot from French. But, must it be considered, because of that, to be just a form of bastardized French? If this is the case, then the language of Gaul, (the old name given to France), two centuries after the Romans had left, was just bastardized Latin! Yes, English may be the official language and French may still be popular in some posh circles, but what language would you use to (1) market a product effectively, (2) greet a compatriot in a foreign land, or (3) rally the country if it is being threatened by an alien power? The answer does not leave any room for doubt: in the same language that is being used to harangue the masses during an electoral campaign. Just listen to the sparkle and imagery of its discourse! Could any other language, spoken or taught in this country, have such a gripping effect? But how sad, that as soon as the threshold of parliament is crossed by its dexterous users, it becomes the “lingua non grata”?

How long will this state of things continue? Well, for as long as the language is associated with an ethnic group. Perhaps, in the minds of some, it still stirs up the image of slaves narrating “zistwar Ti Jean” around a fire. But just whisk away these people of African descent, and put white skinned people in their place – and before you say “Jack Robinson”, the language would have earned acclaim.

It beats me how some people can be so ignorant of history. Has it not dawned on them that Kreol, today, is in very much the same posture as English was in the days of the Normans? In those days (1066- 1350) English was considered to be fit only for the peasants while the knights, barons, clergy and other “aristocrats” discoursed only in French. And then what happened?

The farm labourers, the wood-cutters, the poachers of the King’s deer, and the poor “ignorant” villains developed a remarkable language. They threw away all the annoying rules of grammar that make it a point, it seems, of tripping everyone. They could not be bothered to watch their tenses, or make sure that the adjective agreed with the noun, or distinguish between the masculine and the feminine. They spoke as they liked. But most important of all, they had no qualms about language purity, and constantly borrowed words from the language of the Norman masters. And the outcome of it all was the marvelous English language which ended up being spoken and written by those very aristocrats and men of letters who reviled it. In the same way, Kreol is following the same path. There are no grammarians, academics, or other spoil-sports to brake its progress. It does not hesitate to borrow from outside – especially from the scientific and computer world.

This language spoken by this “peuple admirable” is unstoppable. Day by day, it is gaining in richness, flexibility and ingenuity. Although the road towards its acceptance will be strewn with hypocrisy, hysteria and chauvinism, the end can never be in doubt. The decision makers who deride and oppose this beautiful language still have time to show a change of heart. Future generations might judge them less harshly.

6 responses to “The Kreol language”